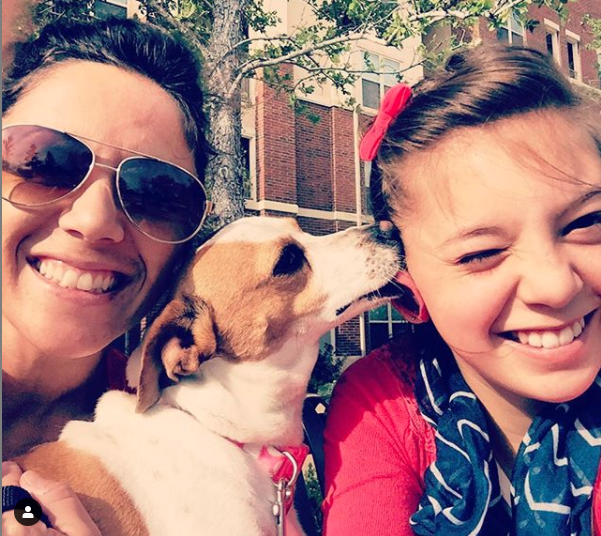 (From Jessica’s point of view)

Hi everyone!  As you all know we moved to Texas not to long ago.  Since we have a dog we decided to drive.  For two days we drove from 6:00 am until 12:00 am with few bathroom breaks.  The drive wasn’t as bad as I thought.  We had plenty to do in the car.  We colored, searched for out of state license plates, watched movies, and talked.  There wasn’t much to see though.  It was basically the same thing over and over.  Land, cows, oil pumps, lots and lots of more land, some more cows, a little more land, and I don’t think I need to go any further for you to get what I mean.  Anyway, the drive went better than I thought.

At the end of the second day we finally made it to our apartment we would be staying in for a while until we found a house.  OK…I guess that was kind of a lie…we got to the building with our apartment, but we still had to find a way to park and make our way through the four story building to finally get to our apartment (this took about another 30min).  I have to admit I did not expect the apartment to be as cool as it was.  I thought it would be one room that was cramped, only had a bathroom, a sofa, and a table.  Yep, I was wrong, really wrong.  It’s actually pretty nice and roomy.  Anyhoo, as we finally began to settle in we encountered many obstacles that I’m sure you’ve already read, so I won’t bore you with those stories.

We’ve been exploring Texas everyday now, going to places and seeing what we can find. We got to try many new places to eat like this place called The Magic Time Machine.  It’s really cool, because it’s this really old place, that looks like an old lady used to live there and has a bunch of different themed booths you can sit at.  Also the waiters/waitresses are dressed up as different characters.  We all loved it, but I think Owen loved it the most. Ever since then he won’t stop asking to go there!  We also got to meet some new people like my dad’s boss.  Him and his wife have two hairless dogs who are actually really cute.  The parks are really cool here, too.  One has this whole ninja course (well that’s what I think it’s like) and a tire swing that Owen and I loved!

We also experienced our first Texas thunderstorm.  That one storm probably gave Texas more rain than California gets in a year!  The lightning would light up the sky like fireworks, but you couldn’t really hear the thunder.  Texas weather is very different to what I’m used to.  It’s been super windy and cold, and then all of the sudden it will be 85 degrees.  I miss the warm yet breezy California.

Our adventure has been a crazy yet fun one, and I can’t wait to see what’s in store for us in the future.

2 thoughts on “Exploring Our New Home”